On the twelfth day of Christmas...

History of a Holiday 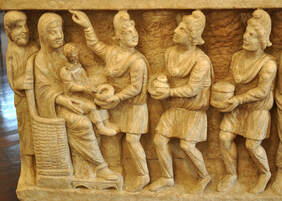 ​The holiday known as Twelfth Night has historically been a high-spirited, mid-winter event. While the actual origins are lost to history, the season of Christmastide (Advent to Epiphany) has contained many different traditions over the course of time.

The earliest mention of December 25 as Jesus’ birthday comes from a mid-fourth-century Roman almanac that lists the death dates of various Christian bishops and martyrs. The first date listed, December 25, is marked: natus Christus in Betleem Judeae: “Christ was born in Bethlehem of Judea … ”

​December 25 came to be celebrated as Christmas in the western Roman Empire (it was celebrated January 6 in the East especially in Egypt and Asia Minor). January 6 for most Christians eventually came to be known as the Feast of the Epiphany, commemorating the arrival of the magi in Bethlehem. The period between became the holiday season later known as the 12 days of Christmas. The twelve days between Christmas and Epiphany were filled with festivals, ending with a party on the Twelfth Night.
​
By the Renaissance, Christmas was a day of low-key observance that opened an annual twelve-day festival of religious ceremony. The English word "Yuletide" actually means the twelve-day period between Dec. 25 and Jan. 6. In many communities, large bonfires were set in village centers, and on Christmas eve, each family burned a ceremonial Yule log to start the hearth-fire around which its members and visitors would gather throughout the rest of the Christmastide festival. While one of the period's most celebrated holidays was New Year's, its second most important ended the twelve days on January 6 and was called Twelfth Night.
​ 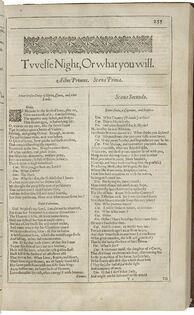 The most famous Twelfth Night is, of course, William Shakespeare’s play of that name. In spite of some scholarly objections, tradition has it that the play was first performed at the Twelfth Night celebration before the queen of England in 1601.

In America in the 18th century, Twelfth Night continued to be celebrated as a feasting holiday in an era where food presentation itself was primary entertainment, followed by costumes, music, and impromptu Yuletide plays. Dancing remained an important part of the holiday in the form of formal balls. It invoked the bonds of close community in ways not matched by our own 21st century high-tech lifestyle.

It is precisely that bond of close community and celebration of the goodness of God to send his beloved Son that we want to celebrate at this Twelfth Night Ball.